Assessment the Average Age of Menarche and its Relationship to Weight, Height and Body Mass Index of Adolescent Girls in North-East of Iran

Purpose: Anthropometric characteristics are partly related to menarche age. We aimed to survey the age of menarche, and its relationship to weight, height and Body Mass Index in adolescent girls.

Methods: In this cross sectional study, 460 students aged 18-21 years old at Mashhad University of Medical Sciences included. Data was obtained through questiones. BMI>30 kg/m2 was considered as obesity and a menarche age of less than 11 years was considered as early menarche.

Conclusions: The earlier the menarche, the shorter the final height, P<0.05. There was no significant association between age at menarche and obesity. More studies should be performed to survey in this field to enhance families care for promotion of height and health of girls.

Between early childhood and approximately 8-9 yrs of age (prepubertal stage), the hypothalamic pituitary gonadal axis is dormant, as reflected by undetectable serum concentrations of LH and sex hormones. In females, the breast bud (thelarche) is usually the first sign of puberty (10-11 yrs of age and some showing as early as age seven years), followed by the appearance of pubic hair (pubarche), 6-12 months later. The interval to the onset of menstrual activity (menarche) is usually 2-2.5 yrs, but may be as long as 6 yrs. Peak height velocity occurs early between 11 and 12 yrs of age in girls and always precedes the menarche. The mean age of menarche is approximately 12.75 yrs [1]. During the past decades, the age of onset of puberty in different populations has fallen. The age of breast development has been dropping much faster than the age of menarche [2]. In Western Europe, between 1850 and 1960, age of menarche per decade, was reduced to 4 months per decade [3-5]. Children with low age of menarche are at risk of accelerated skeletal maturation and short stature in adulthood [6]. The absence of normal menstruation is an indicator of infertility and should assess for pathology [7]. Positive correlations between the degree of adiposity and earlier pubertal development in girls have been reported. Conversely, females in whom leanness and strenuous physical activity have coexisted from early childhood frequently exhibit a marked delay in menarche and they frequently have oligomenorrhea or amenorrhea. These observations support the thesis that the energy balance is related to the activity of initiating puberty via hormonal signals. Onset of puberty is influenced by genetic, social, environmental, ethnicity and nutritional factors [1]. Similar findings showed an inverse association of age at menarche (AAM) with mean Body Mass Index (BMI) [8-12]. Obesity and a reduction in the age at menarche, result in the adverse effect on linear growth in girls. Everyone’s stature, will effect on mental health, social and economic status. Due to changes in AAM in the world, the aim of this study on 18 to 21 yr old medical students was to determine approximate AAM and its relationship to their weight, height and BMI at Mashhad University of Medical Sciences.

Questioner had acceptable validity and reliability. Anthropometric information included weight, height and BMI. Measurements were performed by two medical students. Height was measured with a portable height gauge instrument (SEGA) in a standing position with bare feet. Height measurements were calculated twice, and the mean value was considered. A portable scale sensitive to 0.1 kg was used for weight measurement at a similar medical scale (SEGA), which was conducted with minimal under clothe. A lot of care was taken to ensure the accuracy of the research and reliability tools.

The diagnostic criteria of the World Health Organization (WHO) were used to define BMI, overweight and obesity. BMI at the time of the screening examination was calculated as weight (kg) divided by the square of height (m2) in meters. To measure obesity, the body mass index (BMI) was used. BMI equal to 30 kg/m2 was considered as a threshold for obesity in women and men (≥ 95 Percentile of BMI) and overweight (Pre-obesity) was defined as BMI 25.0 to 29.9 kg/m2 with a percentile of 95>BMI ≥ 85, (9-12). AAM considered the onset of menstrual activity (menarche).

From 480 students, 14 persons did not meet the inclusion criteria and were excluded. Out of 466 students, 5 were absent or refused the study and 461 students enrolled the study (Figure 1). 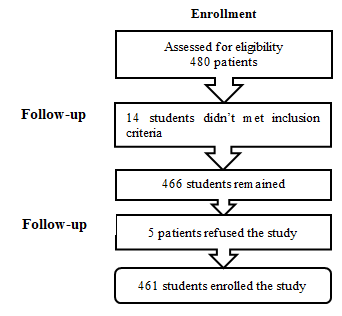 To describe data, statistical tables and indicators such as average has been used.

Data was expressed as mean ± standard deviation or percentages based on the characteristics of the variables.

Data analysis was expressed using the parametric method of Pearson’s correlation coefficient through SPSS, v.18. Statistical significance was assumed at p<0.05 with a confidence interval of 95%.

There was no significant difference regarding to AAM and age, race, height, weight, BMI, parent`s job, parent`s level of education and socioeconomic status. P>0.05.

Table 1: Average age of menarche based on weight and height growth and BMI in the Subjects.

The prevalence of obesity, defined as BMI ≥ 30 kg/m2, was 1.3%. There was no significant relationship between AAM and weight and BMI of the subjects, P>0.05.

Menarche age was significantly higher in girls of fathers with lower education but there was no association between AAM and social status and parental occupation in Stockholm. These results were consistent with our report [18-20].

The mean menarcheal age of 13.32 yrs found in our study was above the average age at menarche reported 12.81 yrs in a survey of the meta-analysis by Bahrami et al. in Iran. In this meta-analysis, the mean age at menarche (12.81) was less than some European countries such as Switzerland, Sweden, and Denmark, more than some countries such as Greece and Italy, and similar to the findings in the United States of America and Colombia. Researchers conducted in different countries show that the lowest and the highest mean ages at menarche are for Thailand and England (11.2 and 13.5 yrs), respectively. In Iran the lowest and highest mean ages at menarche were reported in Sari (11.4) and Birjand (13. 8 yrs) cities respectively.

In Gorgan Ů? intermediate school students had menarche at an earlier age (12.20 ± 1. 45 yrs) compared to university students (13.54 ± 1.30 yrs), (P<0.05). The AAM of intermediate school students decreased by 68.54 days per year. Since a change in the living conditions of the industrial age at menarche decreases, this trend seems logical [17]. Compared to the first Ghanaian study in 1986, the decline per decade of menarcheal age of 0.11 yr was recorded. Declining mean menarcheal age is strongly correlated with improved socio economic development.

Similar study in Bangladesh revealed that more than 48% of girls had historical menarche age of 12 yrs, and the other girls experienced menarche at the age of 10 and 11 yrs. It was observed that significantly (p<0.01) more number of girls who lived in rich family reached menarche than that of comparatively poor family. Therefore, modern lifestyle changes may have the important factors for early age at menarche in Bangladesh. In Tokyo the mean menarcheal age had changed from 15.1 yrs in those born up to 1900 to 12.5 yrs in those born during the 1960’s.

Various researches show that the age at menarche had been decreasing in the 19th and 20th centuries and also in recent yrs. During the 20th century, puberty had been decreasing about 3 months per decade and also a year earlier for girls than in the 1970’s and the age of breast development which is the first clinical sign of female puberty has declined three months per decade between 1977 and 2013.

A review revealed that this variation in AAM is likely to increase the disease for women in: mental health, fertility related conditions, cardiovascular disease, and bone health, diabetes, hypertension, dyslipidemia, liver disease, lung disease, breast cancer, Bipolar Disorder and etc. A higher age specific BMI is contributing to early pubertal onset. But excess weight alone cannot explain this drastic shift. This results were consistent with our report. Age at onset of menarche did not accelerate even in a childhood population with more than 10% obesity prevalence.

In our study, Early menarche at the age of less than 11 yrs in obese students was 16.7% and, in those with BMI less than 30 kg/m2 was 13.7% but not significantly P>0.05. There was no significant relationship between AAM and weight and BMI (Table-P>0/05). Similar studies on Tehran, zanjane, Kuwait, Kish Isand of Iran, and some other studies reported that the girls with early menarche are more overweight [5,12,13].

In present study, height of 9.4% of the participants was less than 1.55 meters that was significantly according to history of their low menarche age. (The Table-Positive Pearson correlations). There was a significant positive relation between AAM and height growth in studied medical students, (Table- height, P=0/0001).

In a similar study, the AAM wasn`t significantly related to somatic characteristics of the girls, but higher socioeconomic state was associated with lower age at menarche. A research conducted as review article during 1999 in Iran, reported AAM at 13.4 yrs, which comparing to our study, the AAM was higher than our research (13.4VS.13.32, respectively). The decline of AAM per 20 years in present study was 0.1 yr (1.2 months per 2 decade). In a similar study which reported menarche at a mean age of 11.71 yrs, adolescents with excess weight had an earlier menarche than their peers. These differences are due to various geographic locations, climate, environmental, racial BMI, biological, socioeconomial, exercise and cultural conditions. Also, AAM is influenced bby lifestyle, and genetic factors.

This study was undertaken among medical female students due to limited resources. The results can therefore not to be generalized for all females in Iran. Measuring ages at menarche using retrospective or recall method is influenced by poor memory. The recall technique was the only feasible method.

The mean age of menarch in our study has been lower compared to previous study in about two decades ago, conducted at 1999, in Iran, (13.32 VS. 13.4 years), respectively.

Due to socioeconomic conditions and lifestyle changes in Iran, can be expected to decline the age of menarche over the coming decades.

Early menarche is one of the causes of short stature and various disease mentioned before. However it is necessary to plan intervention programs within families and school managers to improve dietary patterns and physical activity of this age group to postpone AAM and consider menstrual problems that can occur in an adolescent. In addition there is also a risk of sexual abuse and undesirable pregnancy. Further studies are needed to confirm these findings obtained in this study.

Prior approval for this study was obtained from the Ethics Committee of the School of Medicine and Health Sciences of the University for Development Studies. Informed consents for participation were obtained from all subjects about the study together with the invitation to participate. By returning the questioner, the woman agreed to participate.

The authors declare that they have no competing interests.

We would like to express our gratitude to the office of Education of Medical science, Islamic Azad University for their assistance and cooperation during this research and to Medical students for their cooperation.

Copyright: This is an open access article distributed under the terms of the Creative Commons Attribution License, which permits unrestricted use, distribution, and reproduction in any medium, provided the original work is properly cited.